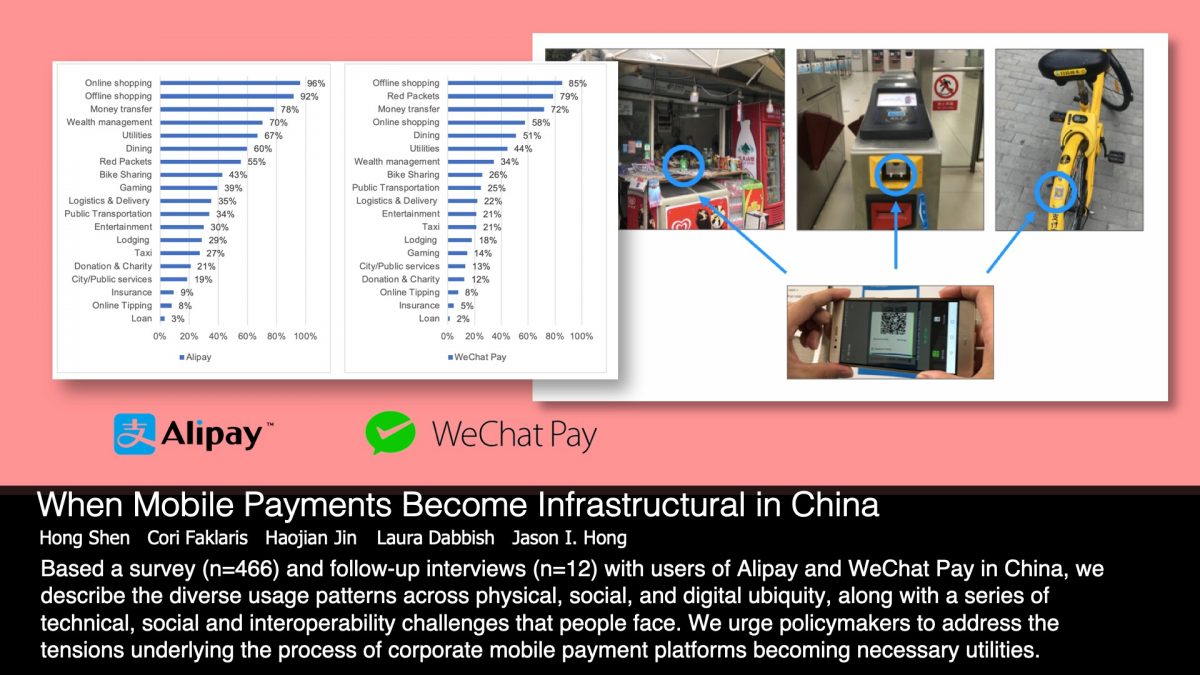 This is a super-weird week to be submitting the camera-ready version of this research paper for publication at CSCW 2020. On Thursday, the “Executive Order Addressing the Threat Posed by WeChat” set a countdown of 45 days until the Tencent app would be “banned,” along with ByteDance’s TikTok. It recognizes what we document – the central role that these apps’ financial transactions play in the U.S.-intertwined Chinese economy.

Of course: I agree that apps such these, and Alipay and WeChat Pay, collect a lot of data about us while we go about using them for both fun and serious self-expression, and that this data is obtainable through various processes by the government of the country in which their parent companies are headquartered. I’ve long worried about our data security and privacy with regards to a constellation of mobile social media and short-form video apps, along with mobile payment options such as Apple Pay, Google Wallet Google Pay, PayPal, Venmo, Zelle, Square Cash, and Facebook’s Messenger and Novi. (Disclosure: I work at Facebook this summer, on marketing/ad data literacy.)

I felt a grief, however, at thinking of our global internet shrinking just a bit more from fully embracing the marvel of how newly connected so many of us can live and work despite our physical boundaries and limitations. The pandemic has sharpened my keen appreciation for how WeChat and other social media help family and friends bridge great distances, and for how much education, business and other knowledge work depends on reliable and usable communication software being available to everyone, everywhere.

It has been a joy and fascination to help pilot and design research into a very different manifestation of internet-enhanced life than the one I know in the U.S., directed by lead author Hong Shen (also a graduate of the University of Illinois College of Media) and with fellow HCII Phd researcher Haojian Jin and my awesome advisors, Laura Dabbish and Jason Hong. In China, you don’t have to go out with your wallet, just your phone! Even street vendors have QR codes for you to scan! Which gives rise to new forms of communication, such as attaching a message with a transfer equal to a penny! and new threat models, such as thieves coming in the night and replacing the QR code printout with their own!

And that was just from the pilot interviews. Read the preprint version of the paper for specifics on what my Chinese co-authors discovered when they conducted a survey (n=466) and interviews (n=12) in China about the advantages and the pitfalls of moving to a largely mobile and cashless economy.

I spoke up about my interest in the project in part thanks to Dan Grover, whose blogging (in English, thankfully 🙂 ) about his experience of working at WeChat as a product manager had piqued my interest in the various advances in the Chinese social media ecosystem. I couldn’t agree with him more in his tweeted responses to the EO on Thursday night:

If you’re a technologist and you still cling to the quixotic belief that we have a power to change the world with what we do, you have no excuse to let petty politics and nationalism stop you from learning from the best on every side of every divide.

Cori Faklaris (aka "HeyCori") is an incoming assistant professor at the University of North Carolina at Charlotte, Department of Software and Information Systems, College of Computing. Faklaris received her PhD in human-computer interaction in 2022 from Carnegie Mellon University's Human-Computer Interaction Institute, School of Computer Science, in Pittsburgh, PA, USA. She also is a social media expert and longtime journalist, and/or "Doer of Things No One Else Wants to Do." View all posts by Cori